If there’s one thing we love in the good ol’ U.S. of A. it’s watching strangers go through the trials, triumphs, and contractor-induced headaches involved with spending loads of cash to renovate their homes. We have whole networks devoted to shows about such pursuits, but if you’ve tired of watching […]

If there’s one thing we love in the good ol’ U.S. of A. it’s watching strangers go through the trials, triumphs, and contractor-induced headaches involved with spending loads of cash to renovate their homes. We have whole networks devoted to shows about such pursuits, but if you’ve tired of watching the open-plan kitchen/living room combos and spacious, luxury home offices come to fruition, there might be a recently released show on the 2022 Netflix TV schedule that’s made for you: How To Build A Sex Room. Never let it be said that this year’s TV premieres were incapable of surprising us.

How To Build A Sex Room (which has gotten a lot of attention from the internet) follows interior designer Melanie Rose as she helps eight couples and one singleton create the pleasure palaces of their dreams. Well, when I say “palace” I really mean bedroom/master suite/lounging area/dungeon, but who’s quibbling over semantics when we can dig into all the intriguing thoughts I had while watching How To Build A Sex Room? Let’s go!

Where Does Melanie Rose Get Her Shoes?

I know, I know! This is a show about sexy stuff and here I am thinking about shoes. But, I can honestly say that from the first time sex room doyenne Melanie Rose appeared on screen I wanted to know where she got those shoes! I’m a woman who believes comfort and style can go together, and our friend Melanie has a wonderful collection of completely practical tennis shoes (or sneakers, whichever you prefer) that are also perfectly gorgeous and coordinate well with her many “I’m a fancy lady” outfits. What’s not to love?

How Could Any Of These Couples Think That Their Sex Rooms Will Be A Secret For Long?

One thing that baffled me is how several of the people having sex rooms made seemed to think that those private spaces would be “secret,” which would lead to them being even more titillated prior to sex room usage.

I’ve got news for everyone. While we aren’t told anyone’s last name, and the show makes an effort to hide addresses/details that will give locations away, we do know first names, what the outside and inside of the homes look like, what everyone does for a living and, most importantly, what everyone looks like. Sorry to be a boner killer, y’all, but your friends, family, and neighbors are going to know that you have a sex room and exactly where it’s located if they watch How To Build A Sex Room. I mean, you’re on TV.

If you’re someone who has watched a lot of Netflix reality shows, whether they be of the “I’m pulling your wig off in this fight” or the “hey, let’s get your home organized” variety, you will recognize a lot of the ingredients that make How To Build A Sex Room what it is. And, I was surprised to find that it wasn’t nearly as wild as I thought it was going to be, especially considering that one of the reasons it’s rated as being for mature audiences is because of nudity.

And, we are now off to the races, my friends! Kudos to the producers for easing us into this sex room thing, because it takes a full 24 minutes into the first episode for us to get to the nakedness referred to in the show’s rating. Truthfully, it’s not what I expected. I was about 80% sure that we were going to end up watching the couples…enjoy their new sex rooms after they were completed, but that turns out not to be the case. Our first hit of butt and boob (With pasties!) action comes courtesy of kink coach Iszi, whom we watch be flogged. (Take a flogging? I don’t know guys, and I’m reluctant to Google it.)

You know what you don’t get to see on HGTV or Magnolia Network? Someone finding out that $20,000 of their design budget is going to be eaten up by an unforeseen issue (which happens all the time), and them dropping to their knees to yell at the sky, “Why, you mutha fuckas?! Whhhyyyyy?!?!” But, we really should, because that would be most people’s response, and How To Build A Sex Room can give us that, as well as all the random, recreational cursing we could ever want.

At Least One Of These Couples Could Use Therapy

Most of the couples on the show seem very happy and well-suited for one another, and like folks who simply want a beautiful, private place to explore their sexuality. However, there is at least one couple that seems to have become really disconnected, likely because of the difficulties of everyday life (based on what I heard from them in the show, anyway). I’m hoping that having a brand new master suite so that they can get busy in style will do the trick for them, but my money is on them needing a bit of couples therapy to seal the deal on getting their mojo back.

The sexytimes/nakedness on How To Build A Sex room is few and far between, and nothing that we were shown — from expert demonstrations to a sex room couple I’ll get to next — bugged me at all. But, something that did make me uncomfortable is how Melanie Rose and her contractor, Mike, simulated sex acts or sorta flirted with each other.

The first time this happens, Melanie lays down on a spanking bench so that Mike can “flog” her… with his adult son, Jeremiah, right there watching. Aside from feeling second-hand embarrassment from Jeremiah having to watch the scene play out, he notes that his mom might not like what just happened, so, yeah… CRINGE.

Wow, They’re Really Going For It On Camera

See those two bespectacled people up there? Because we have so many preconceived notions about what kinky folks might look like, one could easily put their faces beside the phrase “don’t judge a book by its cover” and then direct people to their episodes of How To Build A Sex Room.

If You Take Away The Sex Toy Displays And Kink/BDSM Gear, Most People Would Be Down For These Designs

By and large, I’d say the best part about How To Build A Sex Room (besides Melanie’s shoes) is the fact that she does design some amazing spaces that would appeal to pretty much anyone who enjoys watching home renovation shows.

Even the rooms filled with the most serious kink/BDSM gear are lovingly crafted and beautifully appointed, meaning that if you take away the kinky stuff, you just have cool rooms that many of us would be pleased to call our own and also show off to guests. Of course, my bet is on several of the people we saw here doing just that with all of their sex equipment on full display, and more power to ‘em!

If you haven’t checked out How To Build A Sex Room yet, all of Season 1 is now available to stream on Netflix (opens in new tab).

Sun Jul 17 , 2022
Bone Valley. Bradshaw. Higdon. Proctor. Hall. These are just a few of the names that grace more than 20 cemeteries in Great Smoky Mountains National Park that are only accessible by boat. Today, pilgrims from this region and from all over the country are transported to these special burial sites — […] 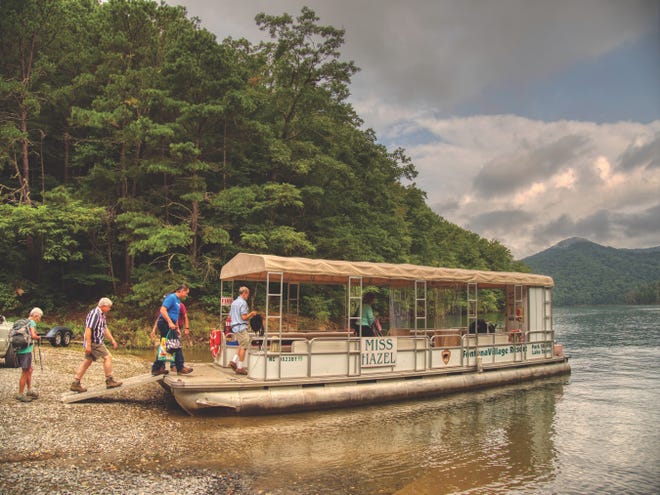